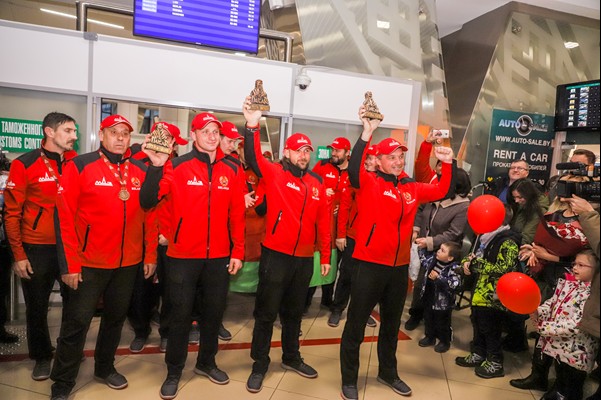 ''MAZ-SPORTauto'' team returned to Minsk from Saudi Arabia, where it took the third place in a rally-race ''Dakar-2020''. The Belarusian crew on a hood truck brought awards of a prestigious marathon –"Bedouins" statuettes.

Belarusians took prize place on ''Dakar'' for the second time in a history. Siarhei Viazovich's MAZ took a honorary bronze. The winner of the race became the Russian Andrei Karginov, the second place got his team partner Anton Shibalov. Aliaksei Vishneuski's MAZ truck finished ''Dakar'' on the 8th position. Aleksandr Vasileuski came to the finish on the 12th position.

“Tactics for the race were successful regarding of the rivals' number and their level. All crews understood the importance of the result, which we were bringing home, and helped in every way on the track. This especially concerns Alexander Vasilevsky, whose truck we dismantled at the marathon stage. Thus, he lost a place in top 10. Anyway, we had a podium, and we brought ''bedouins'' in Belarus for the second time. This is deservedly,'' says MAZ-SPORTauto tram leader Siarhei Viazovich.

According to his words, Belarusians slightly outplayed rivals tactically. ''We had a task to set the pace, so that other riders chased us. They actually did it and made some mistakes, which split the rivals' team by two-by-two scheme. And a further struggle was with two Russian crews, which was much easier,'' explained the pilot.

The last race became the debut for a hood MAZ truck on ''Dakar''. It pulled ahead from the first kilometers, got the second place in the beginning and was a leader on 2 subsequent stages. After that the initiative passed to Russian crews, which was capable to keep it till the finish.

Earlier, Siarhei Viazovich's crew had already become the prize-winner of  ''Dakar''. In 2018 Belarusians brought the second place on a prestigious rally-raid. In the same year MAZ was the first on Turkmen Desert Race and became the champion of Morocco Desert Challenge race in 2019.

Participating of MAZ trucks in ''Dakar'' race pursued sport aims along other tasks. Many design ''know-hows'' passed the test in "combat" conditions. This will improve a serial production of trucks. Successful performances affect Minsk automobile plant's image in a favorable way throughout the world.