MAZ AT THE PODIUM 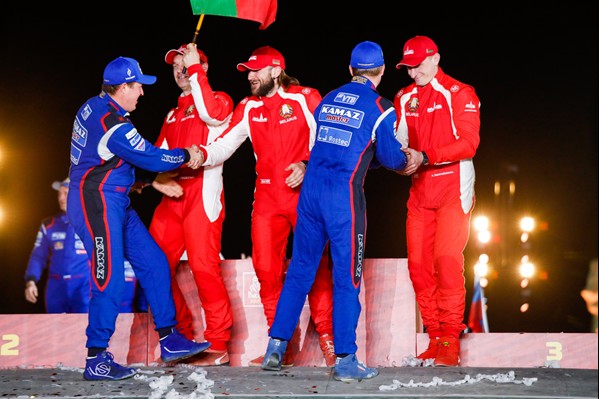 MAZ AT THE PODIUM

Siarhei Viazovich's  hood MAZ truck became the third in the end of the rally-raid ''Dakar-2020''. The Belarusian crew is on the podium of the most prestigious auto race for the second time in the history.

This race became the debut for a hood MAZ truck on ''Dakar''. Belarusians pulled ahead from the first kilometers. They got the second place in the beginning and were leaders during 2 subsequent stages. After that the initiative passed to the Russian crew. They got first places and gradually increased the gap.

The race finished with a short special stage from Harada to Kiddia, small ''entertainment city'' near Riyadh. The track wasn't difficult, but it was tangled. Belarusian crews faced difficulties, which, anyway, didn't affect their positions in the rankings.

Siarhei Viazovich's MAZ took honorary bronze. The winner of the race became the Russian Andrei Karginov, the second place got his team partner Anton Shibalov. The gap for the better result of  Belarusian team was about 2 hours. The crew members got ''Bedouins'' – legendary prize for ''Dakar'' winners.

Young Belarusian pilot Aliaksei Vishneuski improved the result of his performance and took the 8th place. He lost to the champion 5 hours 24 minutes. Aleksandr Vasileuski, who has participated in ''Dakar'' race for many times, finished the race on the 12h position with a lag of 6 hours 52 minutes.

Let's note, that ''Dakar-2018'' became the most successful for Belarusians. Siarhei Viazovich took the second position on a prestigious rally-raid. In the same year his truck was the first on Turkmen Desert Race. And almost in a year his crew became the champion of Morocco Desert Challenge race. It is noteworthy that this African race was the first for the hood truck.

Participating of MAZ trucks in ''Dakar'' race pursued sport aims along other tasks. Many design ''know-hows'' passed the test in "combat" conditions. This will improve a serial production of trucks. Successful performances affect Minsk automobile plant's image in a favorable way throughout the world.