STAGE 7 IS PASSED. MAZ TRUCKS ARE IN THE TOP-THREE! 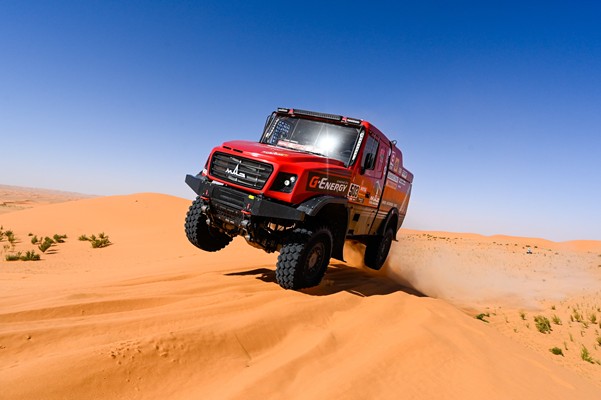 STAGE 7 IS PASSED. MAZ TRUCKS ARE IN THE TOP-THREE!

MAZ-SPORTauto team has overcome the seventh stage of the rally-race "Dakar", but the gap with the leaders has only increased - on straight sections the hood truck of  Sergey Vyazovich does not squeeze out the permissible 140 km/h.

The seventh stage sent riders to the Saudi town of Wadi-ad-Davasir. The longest special stage included 546 kilometers with simple relief, where straight sections with soft ground prevailed. Prior to that, on the day of rest the Belarusians "overdid" the trucks, replacing the main parts with new ones. But the engine is impossible to tune on the spot, so again MAZ trucks could not compete with Russian crews on high-speed sections.

Sergey Vyazovich MAZ came fifth, having spent 5 hours and 10 minutes on the track. The winner of the race was again the Russian Andrey Karginov, who was 9 minutes faster. In "absolute", the Belarusian hood truck is in the top three with a 46-minute gap.

"Nothing complicated happened at the track. It was a flat stage, driving like on asphalt, but with short trips to small dunes. We still can't drive at maximum speed on straight lines. It is slower by about 5-7 km/h - at the same time "full gas". There's nothing we can do about it. For every 100 kilometers, we lose about two minutes. Our truck cannot hold the maximum speed on this type of coverage", notes Sergey Vyazovich.

Alexey Vishnevsky showed the ninth time - 5 hours and 17 minutes. He was separated from the leader of the race by 16 minutes. In the overall standings, the crew took the eighth place, almost 3 hours and 50 minutes behind.

"The special part was rather high-speed, although there were enough sand and dunes. Overall, it went quite well. "In one place we had a little mistake and sat on the crest. "We jumped out, dug up with our hands, spent six minutes. But we buckled up and drove on without adventure. In straight lines, our engine does not want to go to the top speed as fast as the other crews. And they gradually break away", - explains the pilot Alexey Vishnevsky.

Alexander Vasilevsky arrived on the twentieth line, missing exactly one hour. In the overall standings his crew takes the 12th line with a difference of 4 hours 36 minutes from the best result.

The eighth rally-race will be held in the vicinity of the city of Wadi-ad-Davasir. The special area of 477 km long will take place along mountains and canyons, and on the way the drivers will face trials from dunes and strange beauties like black stones on a white desert background.