ALL THREE MAZ TRUCKS ARE IN TOP-10! 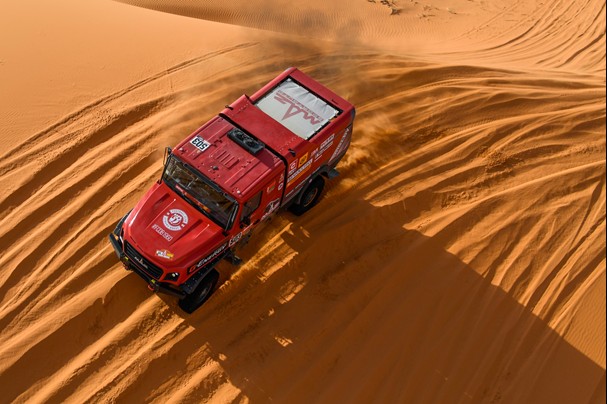 ALL THREE MAZ TRUCKS ARE IN TOP-10!

All three crews of "MAZ-SPORTauto" team passed the sixth stage in the top ten. Sergei Vyazovich was the fastest among the Belarusians and showed the third time.

In the sixth stage the riders arrived in Riyadh. The special part stretched for 477 kilometers and was a severe off-road. The route included a large number of sandy sections, and the main obstacles were large dunes.

The hood truck MAZ went through the phase successfully, although there was also some action. The truck's wheel exploded, but since it did not happen on the special part, the personal result was not affected. The crew spent 5 hours and 8 minutes on the track and arrived third, losing to Russian Andrey Karginov 12 minutes. Belarusians are in the top three with 36 minutes behind the leader in the tournament table.

"Today it's clear why we've been losing so much to the Russians lately. We lose very much with the engine on straight roads, we don't reach the "maximum", - admits the pilot Sergei Vyazovich. - We squeezed out our maximum today, we attacked as hard as we could. In principle, the dunes are not difficult, but we were not competitive with the engine. Our top speed is only 120-130 km/h, and now we can do nothing about it".

Other Belarusian crews have also succeeded. Alexei Vishnevski finished eighth. His time is 5 hours 22 minutes, while losing almost 26 minutes. Alexander Vasilevski finished the race with a line below with a difference of three minutes. In the overall standings, two "bison" went to positions 8 and 9, more than 3.5 hours behind the leader.

"There were a lot of dunes, sands and speed areas at the stage. But we went well, without any stops. There was one section with 2 kilometers of dunes with high ascent, but we climbed from the first time", - said pilot Alexey Vishnevsky.

After the sixth stage, the riders have a well-deserved day of rest. The seventh race will lead the racers to the town of Wadi-ad-Davasir, the crews will have to overcome the longest special part of 546 kilometers. The organizers promise various sections and dunes as well.